I'm back! Joining in with Wednesday Hodgepodge

Now with everything happening in the world and us being in total quarantane for this week, suddenly I have more time and the desire to get in touch with my old blogging friends. I can't wait to ready everybodys posts. So here goes.

1. Howdy Hodgepodgers. It's kind of fun to be back, isn't it?  Last time we met was September, 2018. Tell me something big-important-happy-or sad that's happened in your life since that date. Just one thing. We don't know how long this current isolation situation is going to last and we might need to dole out our news bit by bit. 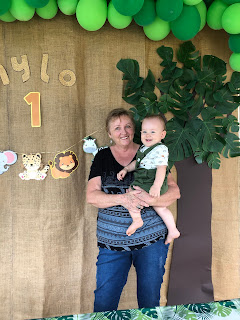 We became grandparents to our third grandchild. He turned one in Jan. of this year. Mylo is the sweetest busy little boy and we love him so much.
2. Might as well get this out of the way early on...COVID-19. On a scale of 1-5 how serious are you about keeping your distance? Explain. fyi-I didn't create the scale but have seen it several places online. Also fyi-we won't onlyhave virus related questions each week, but for this first one it feels right.

4-Extremely limited, only going out when unavoidable, minimal contact with people

3. Raise your hand if you think you might run out of steam in the cooking department before it's all said and done? What's something delcious you've cooked or eaten in your own kitchen in the past week?

Raising my hand here! I'm so over it. 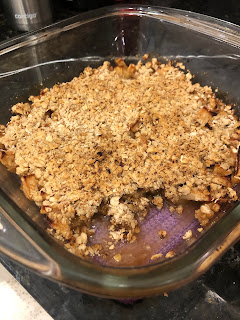 But I did make some plain old Apple Crisp. I forgot about this recipe and a friend posted about it on facebook. I tried it and it is sooo delicious! You can find the recipe here. With a dollop of Vanilla ice cream and you are good to go. Hmmmm.

4. What's a television show or movie you've seen recently (it could be an oldie) that you really liked?

I watched a movie on Monday that was pretty good. It's old (2003) and on Netflix.
The Italian job. About a gold heist that goes bad. Just a funny action movie, where you don't have to think about the current events. And you see lots of Italy (which is why I chose it).
5. Share something funny you've seen or heard this week. 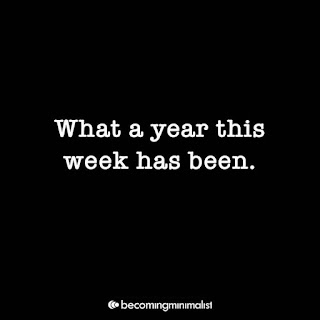 6. Insert your own random thought here 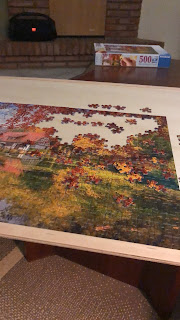 I started to do puzzles again. It's been years! But I started with an easy one, so as not to get discouraged. I am loving it. It's something different than being on your cel., TV or reading. It stimulates my mind and gets those old cells working again, that I thought I had lost.


Great to be back at the Hodgepodge Joyce! Thanks for hosting again.


- March 25, 2020 10 comments:
Email ThisBlogThis!Share to TwitterShare to FacebookShare to Pinterest

Hey! Here I am!
I know I disappeared again but I'm not quiting just yet. I started this new blog, having in mind that I did not want to pressure myself to blog, when I had nothing to say.
But let me give you one piece of advice. If you're on Instagram, don't start watching stories. It is sooo addicting! I am hooked. It's like reality TV except better, because it's people you genuinely like and WANT to follow.  And that's the "rabbit hole" I've fallen into....

But let me catch you up on an awesome trip we made with just us ladies.
Four of us, managed to take the time out of our "busy" (you know how busy it is being retired...ha!) schedule and went on a road trip to the capitol Asuncion. Here we are getting ready to leave. 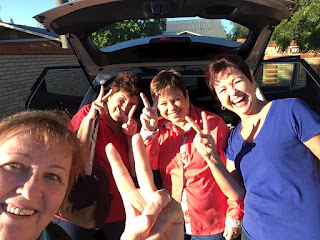 We had not even driven 50 km, when we realized the  air conditioning was not working. And it is a new car I had bought just 6 months ago! And it was hot! You can imagine how upset I was. I called hubby (who is a mechanic), but what can he do from long distance, right? I tried to keep my emotions under control, but my friends said my face was getting redder and redder. haha
Anyway to make a long story short, my son in law (who is also a mechanic) remembered that sometimes the air conditioners freeze over and then nothing works. He gave us the advice to turn it completely off for a while, to let everything thaw out, and then see if it would work again. And that was IT! After having it off for a while, we tried it and it worked again! Phew! That saved us a lot of stress!
To celebrate we decided to have out first photo shoot. We saw this picturesque entrance to someones ranch and there was a random guy waiting there, so that's where we stopped and the gentleman was nice enough to take our pic. haha 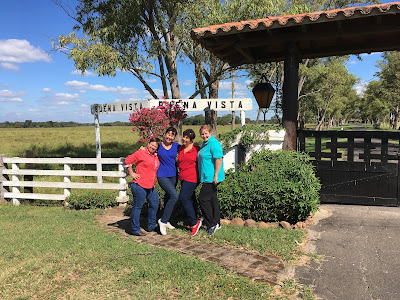 We did not book in a hotel this time. For the first time, we decided to try an airbnb apartment. It was a 3 bedroom and was VERY nice! We were very pleased and it was so good to have the freedom of living all together, yet almost all had their own bedroom. It was very clean and in the perfect location in town, so we didn't have to drive far when going out. 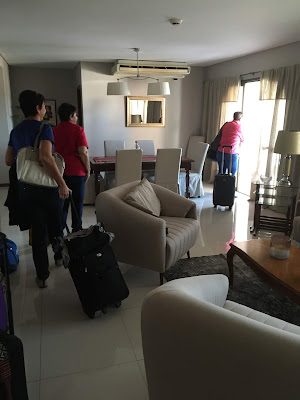 You would think, we would have gone shopping, but no. We decided to do the touristy things we never get to do, when the husband and kids come along. First we visited a hill called CERRO Lambare, where there is a monument on top. An indigenous person statue, which was the perfect spot for more photos. 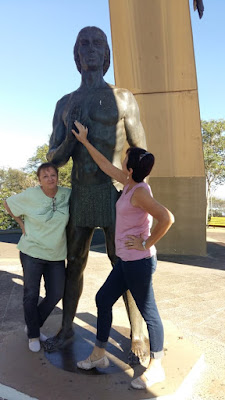 Then we went to the "Costanera", which is a man made beach along the Paraguayan river. It is a beautiful place to enjoy the river and stroll along the shoreline. They also offer boot rides, which we took advantage of. Some of us did not really want to go, but they had to (peer pressure, you know). It was fun, as you can see. We laughed our heads off, because it's something none of us would have done on their own. 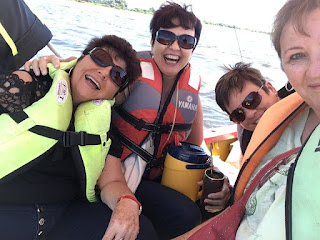 That evening we went out for drinks and dinner. Here I am trying to drink with my pinkie pointing up. The funny thing was the pinkie on my other hand also lifted up, without me realizing it. haha 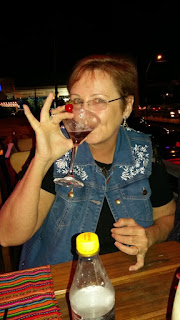 The next day we went to a lake called Ypacarai, which is in a little town called San Bernardino. Even with GPS we got lost and drove around in circle, until we finally managed to get there. It was hilarious. Can you just see four woman, all knowing what to do and how to get there, but still getting lost. Ha! 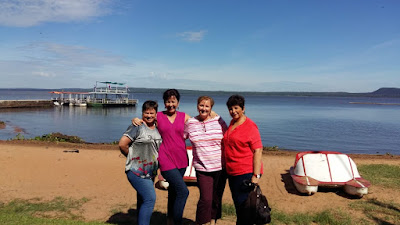 It ended up being another wonderful day. Sunny and warm and not too hot. We went out to dinner again and we ended our trip at a restaurant where you can put together your own pasta dishes. You choose the ingredients and they cook it right in front of you. It was fun and we all went back to the apartment stuffed!

The next day we came home to our husbands who were happy to see us again. Especially mine, because he does NOT do cooking and the stuff I had made ahead of time was dwindling. 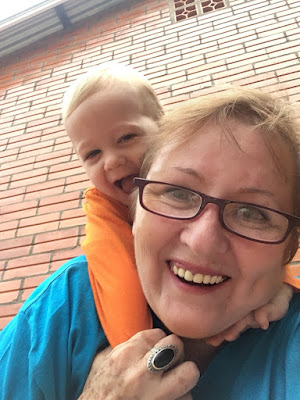 And best of all, I get to see this little guy again!

Betty W
Paraguay
Hello! Welcome to my blog. I am a wife, mother and new grandmother. I have been married to my dear husband for 38 years, and we have two daughters (married) and one grandson (Elia Mark). We live in Paraguay and if you want to know why, just leave me a comment, and I´ll try to explain, what the heck we are doing here....it´s a question I ask myself every now and then. haha I love to laugh and be with friends and family.

Some other great blogs out there